Welcome to the second National Schools’ Football Week, in association with the PlayStation Schools’ Cup…

…and have we got some treats in store for you!

To celebrate day one of National Schools’ Football Week (SFW) the ESFA are heading to St Bede’s School in Ormskirk to take former Premier League and England player, Stephen Warnock back to where his footballing career started. Warnock, now a media pundit, played at every level of schools’ football representing St Bede’s, his district, his county and ESFA U15 England schoolboys.

We’ll be chatting to Stephen about his experiences and he’ll be put under scrutiny by current St Bede’s pupils. We’ll also be running some coaching sessions for PE classes!

Follow us on Instagram (@schoolsfootball) for updates throughout the afternoon and look out for our full interview in the coming days!

We’ll also be heading over to PlayFootball in Birmingham on Monday to see how teams are getting on in the ESFA U12 Monster Fives West Midlands finals! Good luck to all the teams taking part!

Tuesday sees the ESFA Deaf Schools’ Football Finals kick off at the Derby Powerleague. We’ll be there to get some coverage of our fantastic disability tournament – make sure you switch on notifications for our Instagram posts so you can be the first to see all the action!

We’ll be heading off to Hertfordshire on Wednesday for the Schools’ Football Week PlayStation Schools’ Cup Tie of the Round event, featuring Spurs and England player, Harry Winks. We look forward to welcoming Harry along to the event during this exciting week-long celebration of Schools’ Football. Don’t forget to check out @PSSchoolsCup on instagram and Twitter for all the behind-the-scenes action.

We’ll be recapping the weeks’ events so far on Thursday and also celebrating the ESFA’s England U18 Schoolboys squad with a special treat for them, courtesy of our friends at Panini UK. 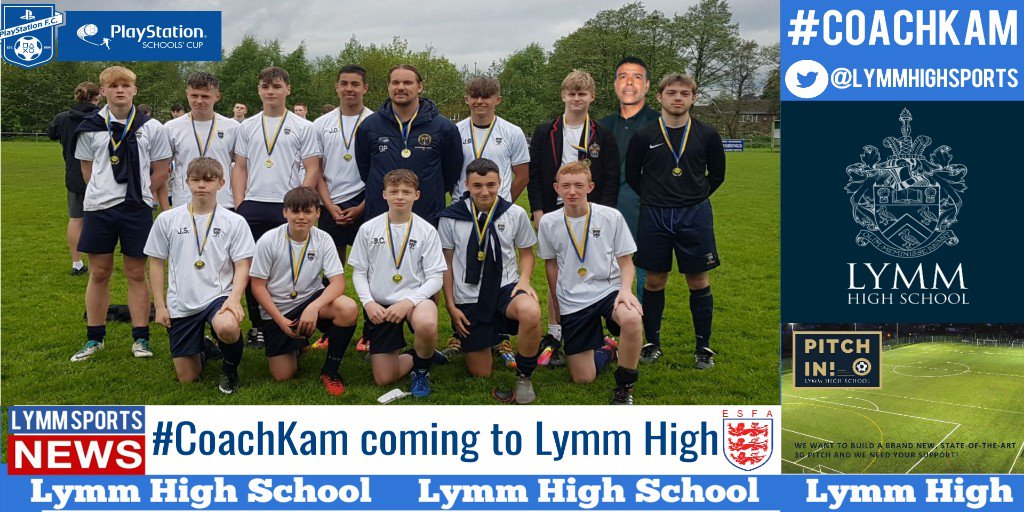 Friday sees competition winners, Lymm High School in Cheshire receive their prize of a coaching session at their school with national treasure, Chris Kamara! After submitting a fantastic competition entry, the school, which have entered almost every ESFA PlayStation Schools’ Cup competition this season, will welcome ESFA coaches and Kammy along for a fantastic end to the week-long celebrations.

Show us your support

Whilst we have some wonderful events planned for the coming week, we love nothing more than seeing what schools are up to to celebrate Schools’ Football Week across England! It’s really simple to tell us what you are up to – just post your pictures and updates across social media and tag in @SchoolsFootball and @PSSchoolsCup with the hashtag #SchoolsFootballWeek

If you want some extra guidance – you can download the schools’ football week guide here!

National Finals aren’t too far away and we’ll be sharing dates and venues across the week so you can plan to join in! Keep your eyes peeled for updates!

Happy Schools’ Football week from all of us at the English Schools’ FA and the PlayStation Schools’ Cup team!

The National Governing Body for Schools’ Football in England.

It’s #MatchReportMonday time, with hosts Ringwood School and Bournemouth School for Girls (BSG). The Ringwood School pupils were also treated to a visit from A.F.C Bournemouth super striker Callum Wilson for the seventh PlayStation Schools’ Cup Tie of the Round event! Click here for more

Before all the match proceedings, Callum Wilson was introduced to both squads pausing for photos and wishing good luck to both teams.

The teams then took to the pitch for kick off, the Ringwood School squad in PlayStation blue and the Bournemouth Schools for Girls squad in red and black kits.

Although the game was a only a local friendly it certainly didn’t play out that way, after kick off it was the Bournemouth School for Girls squad doing all the pressing with the majority of the ball. All of the early pressure payed off when number 7 pounced on a loose ball and slotted it home for one nil to BSG.

The second goal of the game came in a similar fashion to the first only this time it was the BSG number 9 on the case and after picking up a stray pass the number 9 lashed the ball into the roof of the net (Due technical difficulties we lost the goal footage but the goal somewhat resembled this goal below) making it two nil to BSG.

Just before wrapping up the first half the BSG number 7 broke the Ringwood high press, one and one with keeper she smartly knocks the ball past the charging Ringwood keeper collects and passes the ball into the back of the net.

After the break the Ringwood girls headed back out with a point to prove, controlling all the early play and asking questions of the BSG defensive. Ringwoods best chance came from Ringwoods number 15 following a powerful drive and reverse pass into the BSG box, with number 18 to collecting and cutting it back across the goal-line but the ball rolled agonisingly out of play.

With both teams in search of the crucial next goal it was the BSG number 7 again that found the breakthrough, after a powerful drive down the wing number 7 was through on goal and with some quick feet the BSG attacker rounded the keeper and cooly found the back of the net making it four nil to BSG.

The late third goal broke the Ringwood girls spirit and after an untidy challenge in the box BSG were awarded a penalty which was safely dispatched from the spot for the number 9’s second and BSG’s fifth.

The final score Ringwood School 0-6 Bournemouth School for Girls concluded the event and all of the days footballing action. A huge thank to the both teams for competing in such fierce and exciting friendly.